First publication of 'The Green Book' in its English version: The Official Cannabis Guidelines of the Israeli Ministry of Health for the 'Medicalization' Reform.

The Green Book is the official medical cannabis guide of the Israeli Ministry of Health, which aims to train doctors for the treatment with medical cannabis as part of the Medicalization reform.

The Hebrew version of the Green Book was first published here in the magazine in early 2016. Towards the end of 2017, the Ministry of Health published an updated version in which it promised to publish an English version soon.

We are now publishing the English version of the Green Book for the first time.

The goal of the "Medicalization" is to define formal production, sale and treatment procedures in medical cannabis that meet stringent standards that are intended to ensure the product is with precise parameters.

At the same time, the Ministry of Health seems to have ignored important parameters, such as the fact that there are no different cannabis flowers with exactly the same quantities of active ingredients. Another problem is that science has not yet identified all the components in cannabis, so precision in cannabis cultivation is almost impossible.

According to the new guidelines, each link in the supply chain of cannabis products must meet the highest level of quality in the new official Medical Grade standards, such as IMC-GAP (for growing), IMC-GMP (production), IMC-GSP (security) IMC-GDP (for distribution) as well as IMC-GCP (for correct clinical treatment), which are listed in this manual.

Cannabinoids and the endocannabinoid system

The document details most of the important information gathered in recent years in the field of cannabis and the study of its components and their effect, most of it published and appears here in the magazine.

The ministry of Health also teaches the doctors what is THC, CBD, CBN, explains the endocannabinoid system (ECS) and its functions, what is the "Anandamide" and "2 AG" and how the cannabinoid receptors CB1 and CB2 work with important systems in the human body.

Also mentioned are synthetic cannabinoids (JWH-018 and similar), which are 10 times stronger than THC and are much more dangerous to use (they are used, among others, in 'Spice'/'K2').

The procedures in the booklet explains how cannabis flowers will be provided in accordance with the concentration of THC and CBD in varying ranges, according to a new distribution table that defines three categories – THC-rich, CBD-rich and balanced varieties (equal levels of THC and CBD). They are then divided into sub-categories where T stands for THC and C represents CBD. 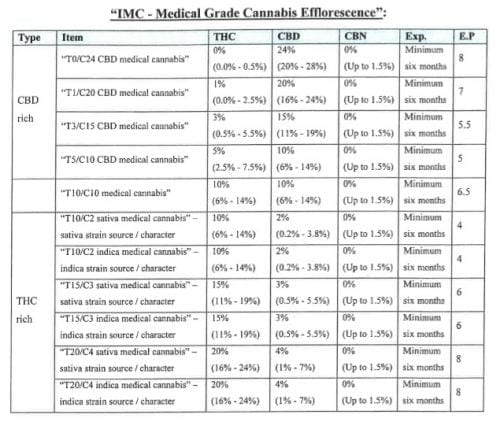 The 'CBD-rich' category does not indicate a hibernation between Sativa and indica and only divides the strains into 4 different levels: T0 / C24, for example, will include strains that contains about 24% CBD and 0% THC. The second level is T1 / C20, then T3 / C15.

Then a small category of strains containing equal amounts of THC and CBD at the 8 to 12 percent limit, called T10 / C10, which are the 'balanced strains' (which were added to the table after we mentioned their importance to the ministry of health).

The broadest category, which also refers to the separation between sativa and indica, is of the THC-rich strains, divided into three different levels for each group. For example, the subclass T15 / C3 is of strains containing about 15% THC and 3% CBD.

It is yet to be known on what basis the Israeli Ministry of Health decided to divide this strains, and not to allow, for example, the use of cultivars strains with15% CBD and 10% THC. This is one of the controversial decisions of the authors of the booklet, which actually eliminates 70%-80% of all cannabis strains currently in use in Israel.

Another serious problem is that this distribution only relates to differences between THC and CBD and completely ignores the 'entourage effect' and the other components found in cannabis, some of which have been found to be as important as the cannabinoids THC and CBD.

Based on the separation of cannabis strains to THC and CBD groups, the Israeli Ministry of Health has constructed an additional table that relates any combination of quantities to the treatment of certain diseases.

In this case, too, it is not clear on what basis the Ministry of Health determined the association between THC and CBD quantities for the treatment of various diseases.

For example, it is recommended in the booklet that cancer patients treated with chemotherapy start with the T10 / C2 group, except those suffering from liver cancer, which is not recommended for THC use in general, but in strains that are rich in CBD (T0 / C24).

After starting treatment and if the doctor decides that it is not effective enough, he can choose to uplift the dosages as defined in this table:

Patients will receive between 10 and 60 grams of cannabis per month at the most, with an initial recommended amount of 0.6 grams per day – that is, 20 grams per month.

This decision of the amounts is based on a study that was not conducted on cannabis but on "Marinol" – a synthetic drug that simulates THC activity.

Reducing the quantities and use of THC

"Before increasing the monthly amount, it is recommended to change to a product with a higher concentration of active ingredients (eg cannabis 10% THC for cannabis 15% THC)," it said.

It also says that "40 grams of cannabis per month is considered a high dose, 50-60 grams a month or more is an examination step in which the question of whether the patient reached the point of end of cannabis treatment".

As can be seen clearly, the Ministry of Health is not interested in the use of strains with 20% THC or higher, which are more popular among hundreds of thousands of "illegal" cannabis consumers. This is apparently what the Ministry of Health hopes to use in prevent of the "leakage" of medical cannabis to the recreational market.

During the course of the treatment and at each of the stages of increasing the dose or quantity, the physicians will be instructed to examine a number of options for dealing with treatment responses. For example, if there is an unwanted response to the treatment, the doctor may consider three options: (1) discontinuing treatment (2) reducing the amount or dose (of THC); and (3) switching to CBD-rich strains.

In the next stage, doctors are instructed how to choose one of the two treatment modalities: The first option is to choose treatment using a single cannabis product, or treatment with a number of different products according to genetics (Indica, Sativa) , According to the patient's needs (day, night), and the nature and manner of the patient's personal use.

How to consume cannabis and how much

It also details how the patient should consume cannabis. Those who are beginners with cannabis treatment should start with only one inhalation (puff) from a joint on the first morning. Then two puffs a day and so on, "with proper guidance and use … and assuming a daily distribution of 4 to 6 times a day, the patient will reach about 20 grams of recommended monthly cannabis mount."

The document emphasizes that "the best effective effect may take weeks and up to several months". Patients will fill a follow-up table to indicate how many inhalations they have taken each hour and every day.

Also detailed is the method of taking medical cannabis, bloating (smoking or steaming), oil (of various kinds) and food (mainly cookies, for children only).

It is emphasized that there is an advantage in providing oil under the tongue by allowing dosage control. However, it is noted that cannabis consumption in smoking is characterized by rapid absorption and reaching a relatively high peak concentration in a short time.

"Within 5 days, 80-90% of the THC gets rid off the body," it says. It also details the possible side effects of cannabis and the prohibition of mixing cannabis with opiates, alcohol or anesthetics (interactions).

Treatment of cannabis will be given in accordance with the official list of Indications (Procedure 106) – a list of 12 diseases and syndromes for which patients can receive medical treatment in cannabis. Cannabis is defined as "last-line therapy", meaning that it will be given only after conventional treatments have been exhausted (opioids, surgeries, etc.).

It is also emphasized in the document that cannabis should not be consumed when mixed with tobacco, but only "clean", as well as the differences between the 'use', 'abuse' and 'dependence', and how doctors should deal with it.

The patients will be instructed to undergo tests and follow up on their use, both on the doctor's responsibility and on personal responsibility, and to answer questions that ensure that they are not addicted to the substance. "Be aware that there are patients who think cannabis therapy is a kind of magic, which will succeed within days to solve all of their problem, but this is not the case," emphasizes the document summary. 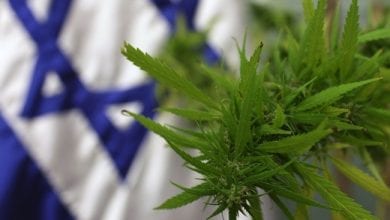